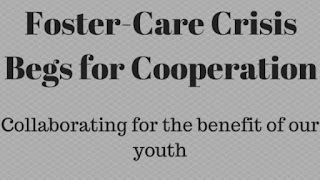 There are a number of organizations in the United States and around the globe that work for the betterment of foster children, but in most cases they work autonomously.

Although their primary missions are the same (to provide a safe and healthy environment for the children in their care), they lack consistent coordination and interaction with their “sister” institutions.

These organizations work hard to provide children with the best facilities and services, but they are often limited to serving the children located within their immediate physical location. Oftentimes, remote and rural areas can cover large geographic areas, placing unique and difficult demands on agencies. Additionally, those organizations located within higher-populated areas can be faced with even more complex and difficult strains on their services and resources because of higher demand.

Communication and integration between the organizations is essential to alleviate the strain and limited resources within the organizations themselves. Throughout recent history we have many examples of situations where citizens from around the world have come together to provide resources, rescue and aid to nations in distress following natural disasters. When these citizens, working in colaboration for the greater good, have come together with a united plan of attack, they have been able to put aside politcal differences and cut red tape to solve an immediate crisis.  Foster-care organizations must develop ways to set aside individual agendas, cut red tape and work in concert to solve the immediate crisis that surrounds the foster-care system in this county.

One of the ways in which the organizations can attempt to interact with one another and work in a more efficient way is through a nationwide Internet foster-care database. With advancements in communiction technology being made on an unprecedented scale, formerly remote regions are now becoming accessible. More than ever organizations can connect with one another from across the globe in a matter of seconds. A nationwide foster-care database would allow various organizations to share information, ideas and location of children. It could also help link necessary resources with the appropriate child in need regardless of where the child resided at the time.

Organizations would save money, time and resources if, through communication and the sharing of information, they could discontinue duplicate expenditures on aid for children. Care could be streamlined if a particular doctor, teacher or care-worker were able to access and provide information and services for more than one organization in mutiple locations.

When organizations put aside politcal agendas and differences and come together for the greater good to solve a problem, they can work wonders.
In this era of technology when volumes of information are at our fingertips, it would be of great help if the personal details of children in need were maintained in a secure form and shared by the right organizations so they could unite the right services with the appropriate child in need in more effective and efficient ways.

If the organizations would be willing to set aside personal agendas, join hands and cooperate with unified national database, there is no ceiling to what we could accomplish for the betterment of our children.

To stay up to date with the latest from Garbage Bag Suitcase, sign up for our email newsletter at www.garbagebagsuitcase.com, or find us on Facebook at www.facebook.com/garbagebagsuitcase.
Posted by Unknown at 8:55 AM No comments:

A New Kind of Foster Care: The Crossnore School Model 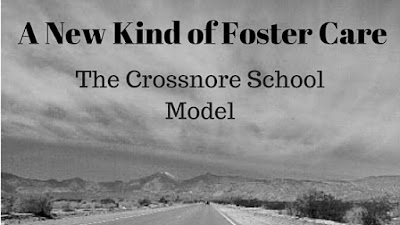 A foster child is generally defined as a child without parental support and protection, placed with a person or family to be cared for, usually by local welfare services or by court order. A true definition, but it leaves out the part where the child is no longer safe in the enviornment that as humans we are supposed to trust in the most: our families.

When these “family” units fail, children are placed in foster homes. Foster homes can take many different forms, from institutions and group homes to private homes, but a new model of “home” is emerging.

The Crossnore School is one such foster home in North Carolina. They are a nonprofit residential foster care home for children in crisis; staff provide a sanctuary of hope and healing for the children there. The school is spread across 85 acres in a beautiful area of the Blue Ridge Mountains. The Crossnore School not only takes care of these children but provides them with a sanctury of hope and healing.

The children who live at Crossnore, live in home-like cottages under the close supervision of two cottage parents, dedicated professionals who proivde love and assistance 24 hours a day.  However, this is not what makes Crossnore unique. They are the only residential foster care home in North Carolina that also has a public K-12 charter school, where all of their children attend.
Crossnore offers a holistic approach to treating the while child emotionally, physically, mentally and spiritually. Their “Theory of Change” model is unique to their organiation. Offering 19 forms of therapy ranging form family and play therapy to substance abuse and equine therapy also makes them unique.

In 2008, The Crossnore School began adopting the Sancturary Model of Care for use at its facility. This model of treatment and organizational framework for creating trauma informed communities was developed with Dr. Sandra Bloom. Crossnore is one of 100 program internationally where the Sanctury Model is applied. Using a trauma-informed basis for care in also another unique principle of the school.

The main mission of the Crossnore School is to provide complete and intensive care for the children to enable them to develop into mature, responsible adults. The children are given complete care and treatment to ensure their quality mental, physical and emotional development. Their model of treatment is unique and quite different from what is used in other foster homes in North Carolina and across the nation.

The Crossnore School works very hard to ensure the children in their care blossom to their full potential. This is why we need to take a second look at our understanding of residential foster homes or congregate care in the United States and look to Crossnore as an example of how foster care can look for the future of the nearly 400,000 children in care each year.

For more information on Crossnore, please visit their website www.thecrossnoreschool.org, or connect with them on Facebook at www.facebook.com/crossnoreschool. To stay up to date with the latest from Garbage Bag Suitcase, sign up for our email newsletter at www.garbagebagsuitcasce.com, or find us on Facebook at www.facebook.com/garbagebagsuitcase.
Posted by Unknown at 9:33 AM No comments:


This article originally appeared as an OpEd piece for Youth Today. To learn more about my work please visit www.garbagebagsuitcase.com and sign up for my newsletter and blog notifications.
Posted by Unknown at 9:59 AM No comments:

Before we reform the Criminal Justice System, we need to take a closer look at the Foster Care System 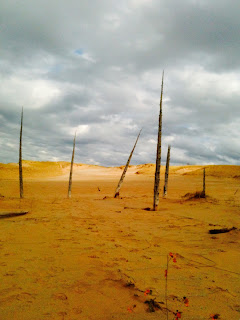 Earlier this week, President Obama commuted the sentences of 46 people who he said were serving sentences disproportionate to their crimes. They were all serving time for drug-related offences. After he commuted their sentences, President Obama called for reform to the criminal justice system. He was quoted as saying, “In far too many cases, the punishment simply doesn’t fit the crime.”

President Obama is calling for a fairer and more equitable criminal justice system. This would entail a federal review of solitary confinement, the restoration of voting rights to former felons, and the passage of a sentencing reform bill by Congress.
I agree with the President. The criminal justice system has been out of balance for a long time. As a nation, we must face the fact that while we represent roughly 5% of the world’s population, the United States makes up 25% of the worlds total prison population. Simply put, we imprison our citizens at a higher rate than any other nation!
I believe that there is more to the issue than simply passing sentencing-reform bills. We need to understand who is in prison, and why. Where do these prisoners come from? On a personal and socio-economic level, what if anything do they have in common? When asked about prisons and inmates the average American believes in generalizations like the idea that inmates come from low-income households, raised by single mothers from urban areas. It's stereotyping at its best. However, there is one common thread that (in some estimations) unites over 80% of the United States prison population: at one point in their lives, they were all foster children!
We have known for decades about the foster-care-to-prison pipeline, yet we continue to do nothing to address the source of the problem. For decades, politicians have called for reform to the criminal justice system, the prison system, and increased spending on law enforcement. While at the same time, our society continues to cut programs in schools, sports and extra-curricular activities for children. It seems, that music, art and social wellbeing aimed at single parent households and children are the first to go.
In tough economic times, families struggle to make ends meet. Many times they are unable to provide for their children. Desperation can lead to bad choices and result in the system taking control of their children. With over 400,000 children currently in foster care, we are at a point of critical mass. Caseworkers are overwhelmed. Qualified foster parents are in short supply. Sometimes, we remove children from a situation only to place them in a new home that is no better than where they came from. Without a review and overhaul of the foster-care system, we may never see the results in the criminal justice system that we so desperately want and need.
Over the years, my husband, a criminal defense attorney, has dealt with many people in crisis. He has expressed his frustration at how difficult it is to get out of the system, once it gets it grip on a person. Many times, with costs, fines and conditions of probation, single parents are set up to fail. He understands that the system itself, from judges, public defenders, prosecutors and probation officers are overwhelmed. He says that it could be as simple as “without demand, there is no need for supply.” He is referring to the cheap heroin that is overtaking our small Northern Michigan community.
After there was a crackdown on the ability for people to get prescriptions for serious pain medications, they resorted to the purchase of illegal narcotics. With that increased demand, there was a flood of small time drug dealers willing to satisfy their need. Thus, without the demand, there would be no suppliers.


Applying this simple economic principle, if we create reform designed to eliminate the conditions in our society that impact impoverished parents, help restore educational programs, and address the theories of the Adverse Childhood Experiences (ACE’s) study, we will produce fewer desperate families and thus less of a potential supply for the foster care and criminal justice system.
Posted by Unknown at 7:40 PM No comments: