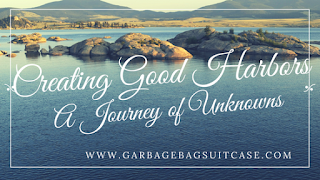 There are less than 60 days left in 2016, and soon another year will descend. I always feel reflective this time of year: looking back at my intentions for the year, relishing in the goals that I accomplished, reexamining the ones that I missed, wondering if there is time to cram in and complete another one before the end of the year (dieting at the holidays … no thanks).

But this year has been one of accomplishment for me. After four long years of sitting on my “to do” list I finally finished and published my first book, Garbage Bag Suitcase. When I originally convinced myself to actually finish the book two years into the process, I had one simple goal: Change one person’s life for the positive. That was it. But, as publication loomed closer, I began to have doubts. I worried that the book would be misunderstood, that others wouldn’t relate to it, that I would be judged, that I had shared too much, or even worse — that no one would read it.

The night before its release, I remember lying awake in my bed, excited and petrified. It was completely out of my control.  During the book release and in the eight months since the book came out, I’ve pinched myself every morning. I can’t believe I was chosen for this amazing journey.

Every day I receive emails from individuals affected by the book in positive ways:


I asked for one email; I received 100s. Then …  something else started to happen.

While out promoting the book, I found myself spending a tremendous amount of time educating and talking about the Adverse Childhood Experiences (ACEs) study and its findings with average, everyday people. I was watching light bulbs go off and I knew that others were just as intrigued as I was. I developed a short workshop from the information, and again, more light bulbs.

It was fantastic and wonderful, but under it was a hint that things weren’t quite right. I suddenly starting hitting a wall and hearing lots of comments like “we understand trauma,” and, “our workers are already trauma informed.” I was excited by the idea that several agencies and groups might have already done the work, but suspicious when I asked a follow-up question: “That’s great, what are you doing differently?”

Blank stares ensued. The organizations had spent lots of time listening to educational material on trauma and its effects in webinars and in person, but that hadn’t changed anything within their organizations. Meeting after meeting, I was listening to folks who, with all good intentions, wanted to make changes within the community, yet couldn’t figure out how to turn the information into implementation and skills for the workers.

Complex problems, even more complex organizations, lots of unintended consequences and short-lived results were becoming increasingly the norm, and I wasn’t willing to accept it. I remember exactly where I was when I realized something BIG had to change:  another meeting, a conference room with about 10 people in attendance — all of whom hold more degrees and education than I do. The discussion was focused on becoming a “trauma-informed community.” Lots of great conversation — it always was. And then I asked, “What are we going to DO? What are our action steps?”

There was silence, and then suddenly the conversation moved on, as if the question had never been asked. I knew in that moment that something had to change. Dr. Cathy Fialon approached me afterward and we ended up having a lengthy conversation about organizations needing skills that could be used immediately to translate trauma information into trauma-informed care for implemented and sustained change.

Together we developed a trauma-informed model that addresses the needs of organizations and can be used immediately for change. Traveling the country, we are always surprised by the positive response of our work, and how groups finally feel that there is something for them to DO when it comes to understanding trauma.

For me, as I reflect and get ready to begin thinking about my 2017 goals, I am giddy. I NEVER thought that this crazy idea of writing a book would allow me to meet and talk with so many wonderful people. I never thought it would move people to share their stories with me. I never thought that I would have the privilege to partner with someone with a PhD, to deliver educational content that could immediately change the lives of children effected by adversity, and I surely never thought that people would care about what I had to say.

With that, I can’t wait to write out my 2017 goals, because I know that I will meet some of them, I will fail on others, but more importantly my world will be opened by opportunities and chances I never could have dreamed of. As Martin Luther King, Jr. once said, “You don’t have to see the whole staircase, just take the first step.”

Shenandoah Chefalo is a former foster youth, and advocate. She is the author of the memoir, Garbage Bag Suitcase, and co-founder of Good Harbor Institute an organization focused on ensuring sustainable, implemented trauma care within organizations and individuals. You can learn more about her and her work at www.garbagebagsuitcase.com or www.goodharborinst.com
Posted by Unknown at 2:33 PM No comments: